Hey, Liberal Media, Quit Staring at Ryan’s Budget; Romney’s Budget is Up Here At The Top of the Ticket 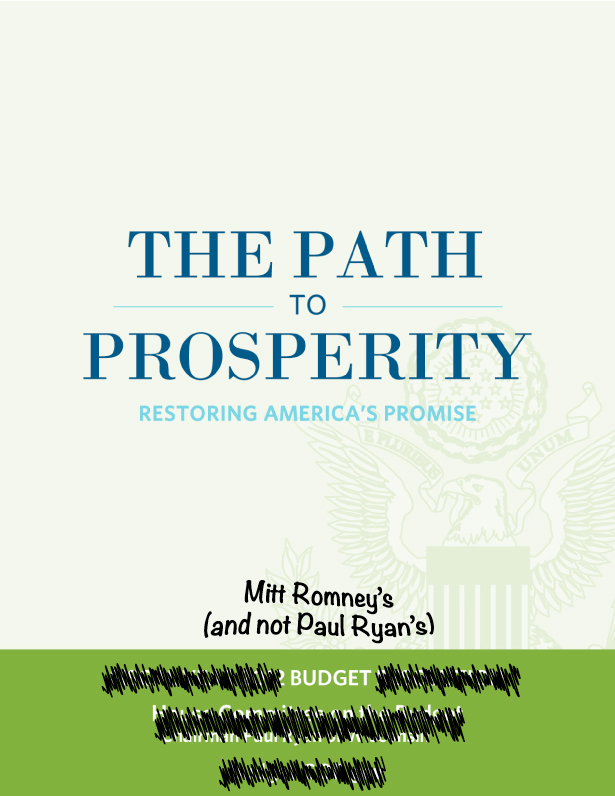 Do the media need any more proof that Romney’s budget is not Ryan’s?

It’s been a week and like old an old married couple, or probably more like your older aunt who just never found the right man and her longtime roommate who is also an older woman who never found the right man, Mitt and Paul are so in tune with each other and are even starting to dress alike (it is about time that wearing straight-legged ironed jeans held up with tightly cinched belts, penny loafers, and topped off with tucked in polo shirts is back in style.)

But even more than making 1980s James Spader relevant again, these two men are rocking the podiums with their deft handling of the liberal media already trying to force a wedge between them. We all know this strategy has worked before, most recently in 2008 where they built up tensions between McCain and Palin by asking Palin questions and then reporting on her answers.

Yep, now they are trying to force Ryan’s budget on Romney just because Paul Ryan is known, and is most popular with the base, for being the Budget guy. Well, I think Ryan was chosen for his many other accomplishments like the things that he has done that has impressed Romney. Thankfully, Romney knows the reasons behind why he chose Ryan as his running mate are not really important to the campaign at hand so he will not muddy the waters by explaining his choice.

But for some, mainly those on the left, they still persist on trying to get the two men to say how the Romney budget is really the Ryan budget, especially when it comes to Medicare. Well, I have looked at the Romney plan and I don’t see it. Sure, both men want to turn Medicare into a voucher system that will grow and thrive in the altruistic environment in which the insurance and pharmaceutical industries dwell.  But the big difference, Ryan actually uses numbers in describing what he will do. Romney knows that nothing gets in the way of telling people about things you will do more than telling people how exactly you will do it.  Even better, by not going deep in the weeds about his own policies gives Romney more time to point out how Obama’s policies are destroying everything we hold dear. It’s all about priorities.

UPDATE: Romney has been quite adept art explaining how Obama has gutted Medicare Trust Fund by cutting 716 billion dollars. Romney goes on to say that he will put back any money cut from Medicare benefits on his first day on the job. Some on the left say that Romney is mischaracterizing what Obamacare calls for and that $716B is really savings to the system through implementation of cost cutting programs aimed at healthcare providers and if Romney eliminates those programs it move Medicare toward insolvency through increased expenditures.

What they fail to see is that Romney has promised to reverse cuts to benefits. So if these programs aren’t cuts to benefits, he won’t reverse them and the savings will remain. It’s that simple.

UPDATE UPDATED: Drug companies and insurance companies need not worry. Corporations are people. Profits to corporations are thus equal to benefits for Medicare recipients. So he will make sure that those benefits that healthcare corporations so count on to stay alive will not be taken away. It’s really that simple.

Jeffrey Frey (pronounced Jeff FREE FREE) likes to say he was born twice as free. But unlike others who may take for granted that glorious birthright, he shares that freedom with you the reader, who most likely will again take his insights for granted. This doesn’t bother Jeff since freedom, unlike marriage, should be available to everyone.
View all posts by Jeffrey Frey →
This entry was posted in culture, news, politics and tagged Budget, Election 2012, GOP, Medicare, Mitt Romney, ObamaCare, Paul Ryan, punditry, satire. Bookmark the permalink.

Sociology and the yoga community.

Never EVER eat the shiny meat

View Across The Pond
Spidersartstudio's Blog

Snark with a Conscience // SNARKADELIA.COM

Right Thinking from the Left Coast!

“Ridicule is man’s most potent weapon.”

PSA Women and Politics Specialist Group
Be Sure You're RIGHT, Then Go Ahead

"Our threat is from the insidious forces working from within which have already so drastically altered the character of our free institutions — those institutions we proudly called the American way of life. " -- Gen. Douglas MacArthur

Idiosyncratic commentary on politics and culture

Political commentary from an insider